The film offers a viewpoint of the war in Ukraine that we’re less likely to see on the news.

The new documentary Freedom On Fire offers a viewpoint of the war in Ukraine that we’re less likely to see on the news: instead of battles and violence, the film focuses on the humanity of those under fire. With his previous work on Winter On Fire, which tells the story of the Ukrainian fight for democracy in 2013 and 2014, MakeMake Editor Will Znidaric knew this was an essential story to tell. We talked with Will about his experience editing and producing a second documentary with the Winter On Fire team, how they managed emotions around heavy topics, and how they ultimately captured the Ukrainian spirit.

Q: Tell us about your role on this project.

A: My title can mean so many different things on many different projects, but in this sense, it meant that in addition to editing, I was responsible for wrangling and running an entire team of fellow editors. We just didn’t know how ambitious the schedule actually was! Our director, Evgeny Afineevsky, wanted to submit it to the Venice and Toronto film festivals, but the submission deadline for both is somewhere around the end of August. The invasion started in late February and we started in earnest on this project in early April. We worked hard, and the film ultimately premiered in Venice. In addition to Evgeny being a talented filmmaker and friend, his dogged determination to have this story reach the world audience inspired us all on a daily basis.

Q: Can you tell us more about your editorial process?

A: What I love about being a documentary editor is that it’s always a process of discovery. There are always going to be interesting things you would never have thought about that emerge out of the footage you receive — it’s always going to surprise you, and that was certainly the case on this project. We discovered an astounding amount of resiliency and humor among the civilians. This film is not a catalog of horrors — instead, we’re trying to show humanity in this horrific circumstance, and ultimately give people hope. For instance, the film opens in an underground bomb shelter, and we find that there’s a standup comedy routine happening there, while they are under fire. These comedians were still able to put a standup show together and tell jokes. When you start with something like that, it not only is unexpected, it says a lot in terms of the themes that were trying to present in the film. We quickly began structuring around individuals as we received footage. More material would come in that was better than what we had previously, so we would scrap the other stuff and completely change the movie. This would happen on a weekly basis. Once scenes or sections started to finally solidify, we were able to parse that material out to these different editors to assemble, and then it would come our way and get assessed.

Q: What challenges did you face during the making of the film?

A: One of the challenges we faced was that we had more footage coming in than we had translators, and most of the material was either in Ukrainian or Russian. We had to get it all transcribed, translated, and subtitled in order for me to work on it. It became apparent pretty quickly, given the ambition of the schedule and the amount of material, that we would need a large and efficient team. In addition to our original team of editor Jan Supa, and assistant editors Bohdan Kushnirchuk and Gupta Kartikye, we expanded to add editors Tom Mika and Ted Woerner, as well as a small team of four Ukrainian editors based in Kyiv. We were still getting the puzzle pieces every week. We never really knew what was coming, and we didn’t know what the ultimate structure was going to be — we were just working with what we had and trying to keep our heads above water. Through our creative assessments, it quickly became apparent we were looking for everyday people for this — real stories of people on the ground dealing with this extraordinary situation.

Part of why this was even able to happen despite these challenges is because of MakeMake and their logistical support. Whatever we needed, we were able to access without question, and Stacy Kessler-Aungst (Head of Post Production) especially worked hard behind the scenes to create more space and make more stations available for our editors. That’s all due to Angus Wall (Executive Producer) investing so much in this project, believing in putting something like this out into the world, and trusting us to put something together that would warrant that level of investment. 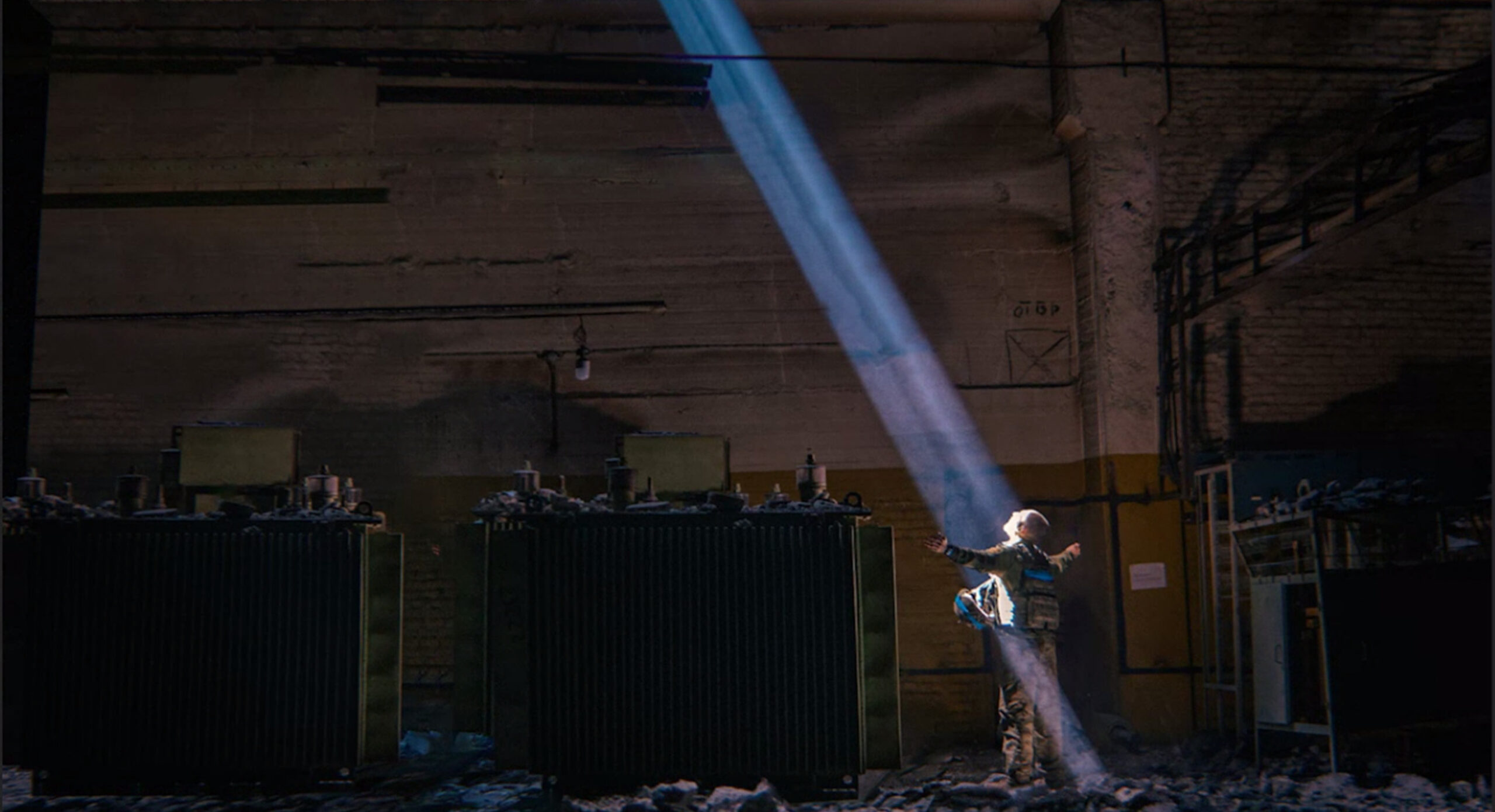 Q: What was it like working with the team on a second film about the conflict in Ukraine?

A: We wouldn’t have been able to pull this off without having established a high degree of trust between me and Evgeny already. That creative relationship is so intimate, and you need a high degree of trust as a director to hand off your material to your editor and know they’ll find those notable moments. Since we had already generated that, we could hit the ground running. We also walked in the door with an understanding of the Ukrainian spirit — resilient, darkly humorous, and full of creative energy. In the face of war and destruction, they were still able to create — to play music, tell jokes, draw, and make art. We wanted to show what they’re fighting to defend. Of course, the violence is part of the story, but our focus was on everyday people. That was the motivation behind talking to everyone from an 11-year-old girl who was drawing pictures and feeding stray cats to Father Andriy Zelinsky, who I call our resident philosopher. That way, the audience has more to relate to, and that deepens your understanding of what’s happening.

Q: Which characters in the film exemplified that “Ukrainian spirit” for you?

A: The film is a series of vignettes featuring different people, but you always want some type of throughline to hold the structure. We didn’t have that for a long time. Then we finally interviewed a journalist named Natalia Nagorna, who had been working for years on the ground in Ukraine — through her, we were able to track the last eight years since Winter on Fire. She’s also the type of person that embodies that Ukrainian character. She has a great sense of humor and was warm and relatable.

Q: How did you manage the emotions that inevitably came up while working with such a heavy subject?

A: It takes a lot out of you, dealing with material that involves war and death. There’s no separation between who you are as a person and the work you’re working on. It’s part of your personal journey, your personal story: the project is a chapter in your life. There’s a lot of vulnerability that goes into this work. As a team, we spend time talking about work, and we spend time talking about how we’re being affected by the content and how we’re feeling personally. Are we getting enough rest? Are we eating enough? Are we taking walks? If I see someone’s maybe close to burnout, I try to encourage them to take a break. We encourage sharing our feelings because it bonds us and also helps us release them so that no one individual is carrying this darkness alone. I also try to remember that even though it’s hard, it’s for a purpose. Remembering our motivation for telling this story absolutely helps.